At the Gairdner Foundation International Award ceremony in Canada this year, two of Britain’s leading biomedical researchers, where presented with The Canada Gairdner Award for their research into which molecules cause inflammation and destruction of joints in rheumatoid arthritis (RA). 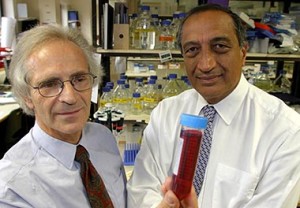 Professor Sir Ravinder Maini and Professor Sir Marc Feldmann have been working in the biomedical field for decades, and the award presented was for the research they both performed in the 1980s. These Gentlemen discovered anti-TNF (Tumour necrosis factor) treatment for RA. Anti TNF therapy is now used to block anti bodies, allowing a swift improvement for suffers of rheumatoid arthritis. TNF is a protein messenger molecule, which drives the inflammation in the joints, so by creating the drug, they could prevent inflammation and further damage by effectively blocking TNF.

This research was crucial to enabling major development in effective treatments for rheumatoid arthritis, and since then has had an incredible impact on the world, allowing the correct treatment to be given out to RA suffers  worldwide, giving millions of people a better quality of life. Identifying which molecules cause inflammation and destruction of joints meant that these Gentlemen provided the stepping-stones for organisations to create treatments to try to break down these molecules building in joints, allowing the pain and inflammation to subside for a period. By regularly taking the medication, arthritis suffers no longer have to deal with the pain and difficulty that everyday tasks created for them previously.

Tenura shares this vision of making life easier for those that suffer with impairments to strength of grip, which adds unnecessary difficulties to everyday life. Our silicone jar and bottle openers are just two of our products dedicated to those who suffer from pains in joints, making certain tasks easier to do, and relieving the pain that normally comes with them.

We congratulate Professors Ravinder Maini and Marc Feldmann for their efforts to help people suffering from RA, and outstanding research into the causes of arthritis.